Joule’ is the electro-kinetic energy force of mechanical and thermal masses moving at velocities over distances smaller than cells and measured in Newton’s.

In the Norse traditions of ‘Naming Forces in Nature’, Thor was the name of a Hammer (symbol of Power) wielding God (force of nature) associated with Thunder, Lightning, Storms, Oak Trees, Strength, the Protection of Mankind, and also Hallowing, Healing, and Fertility.

JOULE’ OF THOR… Targets the Brain and the 45-49 miles of nerves that run through the human body. The Brain and Central nervous system is the Courier’s of Electric Energy to all of the 10,000 Trillion Cells that make up the body. Gold infuses the entire brain and nervous system with increased electric spark for our cells to have their highest functional capacities. Anciently Gold was “Precious” because of it’s Healing and functional restorative qualities to the Human body. They ate Gold, cooked with Gold, used utensils made of Gold, and even drank wine and juices infused with Gold called Elixer’s.

THE 24k GOLD in JOULE’ OF THOR is carried by The Potted Physician or Aloe Vera and Ceylon Organic Cinnamon this is an Elixer of Life, Joy and function, Mentally, Emotionally and especially Physically. Drink Up and Hit Life with your Best Shot!!!

Recommended daily dosage is one shot glass which by US Utah standards is 1.5 US fl oz (44 ml)

It is the same dosage for athletes, people in wheelchairs, and anyone who wants to maintain neuro electric force mentally and physically… it also reduces pain of injury.

There are no reviews yet.

Be the first to review “Joule’ Of Thor” Cancel reply 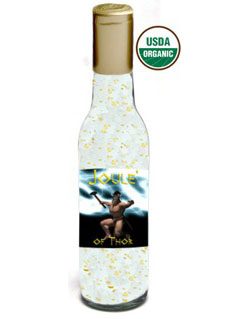