Civil Liberties of, by and for the People… are being taken away…  Funded by the ‘Multi-Trillion Dollar Annual profits-industry’ of the, “legalized (Big-Pharma) druglords/dealers”…

WHOSE $$$MONEY$$$  Rules the WORLD… BUT FIRST, SOME INSIGHT AND BACKGROUND

COMMON SENSE (which isn’t so COMMON anymore) led to and CREATED THE COMMONWEALTH OF THE PEOPLE WHO LOVED THE IDEA OF INDIVIDUALS HAVING the Right to LIFE, LIBERTY, AND THE PURSUIT OF HAPPINESS…

This led to one of the most extraordinary documents in human history — the Bill of Rights— but this has come to an end under President Barack Obama. Derived from observing sacred principles of natural law, the Bill of Rights has come to a sudden and catastrophic end with the President’s signing of the National Defense Authorization Act (NDAA), a law that grants the U.S. military the “legal” right to conduct secret kidnappings of U.S. citizens, followed by indefinite detention, interrogation, torture and even murder. This is all conducted completely outside the protection of law, with no jury, no trial, no legal representation and not even any requirement that the government produce evidence against the accused. It is a system of outright government tyranny against the American people, and it effectively nullifies the Bill of Rights.

In what will be remembered as the most traitorous executive signing ever committed against the American people, President Obama signed the bill on New Year’s Eve, a time when most Americans were engaged in celebration of family and friends.

This is the law that will cement Obama’s legacy in the history books as the traitor who nullified the Bill of Rights and paved America’s pathway down a road of tyranny that will make Nazi Germany’s war crimes look like child’s play. If Bush had signed a law like this, liberals would have been screaming “impeachment!”

This seems silly today, of course, given the natural tendency of all governments to concentrate power in the hands of the few while destroying the rights and freedoms of their own people. But in the 1780’s, whether government could ever become a threat to future freedoms was hotly debated. By 1789, enough revolutionary leaders had agreed on the fundamental principles of a Bill of Rights to sign it into law. Its purpose was to provide additional clarifications on the limitation of government power so that there could be absolutely no question that government could NEVER, under any circumstances, violate these key principles of freedom: Freedom of speech, the right to bear arms, freedom from illegal searches, the right to remain silent, the right to due process under law, and so on.

Of course, today’s runaway federal government utterly ignores the limitations placed on it by the founding fathers and mothers.  It aggressively and criminally seeks to expand its power at all costs, completely ignoring the Bill of Rights and openly violating the limitations of power placed upon it by the United States Constitution. The TSA’s illegal searching of air travelers, for example, is a blatant violation of Fourth Amendment rights. The government’s hijacking of websites it claims are linking to “copyright infringement” hubs is a blatant violation of First Amendment rights. The government’s demand that all Americans be forced to buy private health insurance is a blatant violation of Article 1, Section 8 of the Constitution — the “commerce clause.”

Now, with the passage of the NDAA, the federal government has torpedoed the entire Bill of Rights, dismissing it completely and effectively promising to violate those rights at will. As of January 1, 2012, we have all been designated enemies of the state. America is the new battleground, and your “right” to due process is null and void.

Remember, this was all done by the very President who promised to close Guantanamo Bay and end secret military prisons. Not only did Obama break that campaign promise (as he has done with nearly ALL his campaign promises), he did exactly the opposite and has now subjected all Americans to the possibility of government-sponsored kidnapping, detainment and torture, all under the very system of secret military prisons he claimed he would close!

“President Obama’s action today is a blight on his legacy because he will forever be known as the president who signed indefinite detention without charge or trial into law,” said Anthony D. Romero, executive director of the American Civil Liberties Union.

Origins of the Bill of Rights:
The Bill of Rights, signed in 1789 by many of the founding fathers of our nation, was based on the Virginia Declaration of Rights, drafted in 1776 and authored largely by George Mason, one of the least-recognized revolutionaries who gave rise to a nation of freedom and liberty.

Mason was a strong advocate of not just states’ rights, but of individual rights, and without his influence in 1789, we might not even have a Bill of Rights today (and our nation would have slipped into total government tyranny all the sooner). In fact, he openly opposed ratification of the U.S. Constitution unless it contained a series of amendments now known as the Bill of Rights.

SECTION ONE of this Virginia declaration of rights states:
“That all men are by nature equally free and independent and have certain inherent rights, of which, when they enter into a state of society, they cannot, by any compact, deprive or divest their posterity; namely, the enjoyment of life and liberty, with the means of acquiring and possessing property, and pursuing and obtaining happiness and safety.”

Section Three of the declaration speaks to the duty of the Citizens to abolish abusive government:

“That government is, or ought to be, instituted for the common benefit, protection, and security of the people, nation, or community; of all the various modes and forms of government, that is best which is capable of producing the greatest degree of happiness and safety and is most effectually secured against the danger of maladministration; and that, when any government shall be found inadequate or contrary to these purposes, a majority of the community hath an indubitable, inalienable, and indefeasible right to reform, alter, or abolish it, in such manner as shall be judged most conducive to the public will.”

By any honest measure, today’s U.S. government, of course, has overstepped the bounds of its original intent. As Mason wrote over 200 years ago, the People of America now have not merely a right but a duty to “reform, alter or abolish it,” to bring government back into alignment with its original purpose — to protect the rights of the People.

FARMACIST HISTORY IS A TRUE REMINDER AND AN EYE OPENER OF ‘RIGHTS, LIBERTY AND HAPPINESS’ FOR YOU, LOVED ONES AND FRIENDS PLEASE SHARE IT!!!

We can not offer refunds on eBooks as once you have downloaded the purchase we can not reverse it. All sales are final. Thank you for your understanding in this matter.

There are no reviews yet. 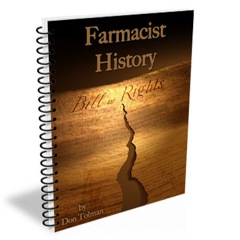